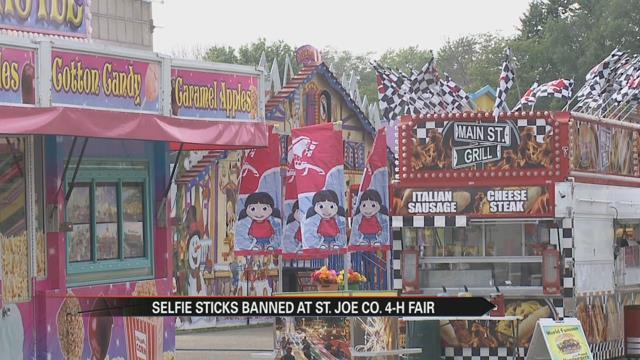 The way you capture your memories and favorite moments from one Michiana fair this year might have to change. The St. Joseph County 4-H Fair opens its gates in just three days, and officials say this year the selfie stick is banned.

For nearly a century, organizers have brought, fun, food and excitement to the fairgrounds every summer.

Thousands of people equal tens of thousands of memories; memories that will have restrictions this year.

“Not only walking around with it but on the rides it would be a real safety issue,” says Caldwell.

Caldwell is talking about selfie sticks. He is asking folks to leave them at home this year.

“If you are on top of the carousel because it's really big and if you get a high up view you could get a picture of the whole fair,” says Isabella Worrell, a sophomore at Adams High School.

Others attending are happy they won't have to deal with the disturbance.

“All I need is my little cell phone. It does what I need and those are a distraction. People are more worried about that than what they are doing,” says Theresa Rybicki.

“Bring your cell phone, take all the pictures you want. Bring your cameras, bring your videocameras, but we ask you not bring in the sticks,” says Caldwell.