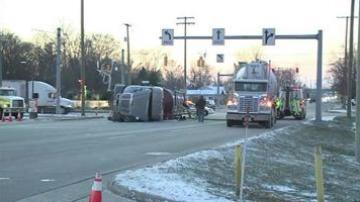 ELKHART, Ind. -- A semi overturned Tuesday afternoon, sending one man to the hospital and blocking off traffic for hours.

“The semi was turning the corner and for some unknown reason it caused it to tip over,” said Emergency Management volunteer Jerry Kindig.

It happened at the intersection of State Road 19 and County Road 20 in Elkhart around 12:30.

The owner of AJP trucking company said the truck driver was taken to the hospital with a broken rib but is otherwise okay and has since been released.

For most of the day and well into the night, crews worked to remove the load he was carrying-- non hazardous plastic pellets.

The company has launched an investigation into what might have caused this accident.

“You can see some marks on the curb there but what actually caused it to tip over, I don’t think they’ve even determined that yet,” Kindig said.

No one else was injured when the semi overturned.