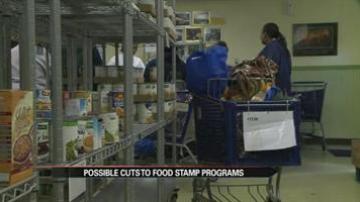 SOUTH BEND, Ind. -- The US Senate could cut billions of dollars from federally funded food programs. That means many food banks may not be able to help everyone in need.

Nationwide, the demand for food is great and soon that need could become even greater.

"This is federally-funded food we have, and they're always threatening to cut that," said Jamie Owen of the Food Bank of Northern Indiana.

For Owen, it's another obstacle she and others at the Northern Indiana Food Bank have to deal with.

Right now Congress is considering a deep cut of $39 billion to SNAP. The cuts are happening at a time when a record number of people joined the program post-recession.

"Many of them are dependent on food stamps, because while they may be back to work, they're not making the same money that they were," said Owen.

One in five people in Michiana need help putting food on the table.

With the potential cuts looming, Owen worries they may not be able to help everyone in need.

"Some people are inevitably going to go to bed hungry and that breaks our heart as an organization because our mission is to feed the hungry, and alleviate hunger. We're faced with a huge roadblock, that's going to be difficult to get around," said Owen.

That's something they won't be able to do without more donations.

"We're just hoping for a miracle that it won't happen, but if it does, we're going to reach out to the community and we're just going to have to work harder," said Owen.

The bill to cut food stamps is currently being looked at by the Senate.

A vote is expected soon.

Local food bank representatives are asking residents to contact their legislators and urge them to reconsider.