Senate Dems on Kid Rock run: We can't afford to treat this as a joke 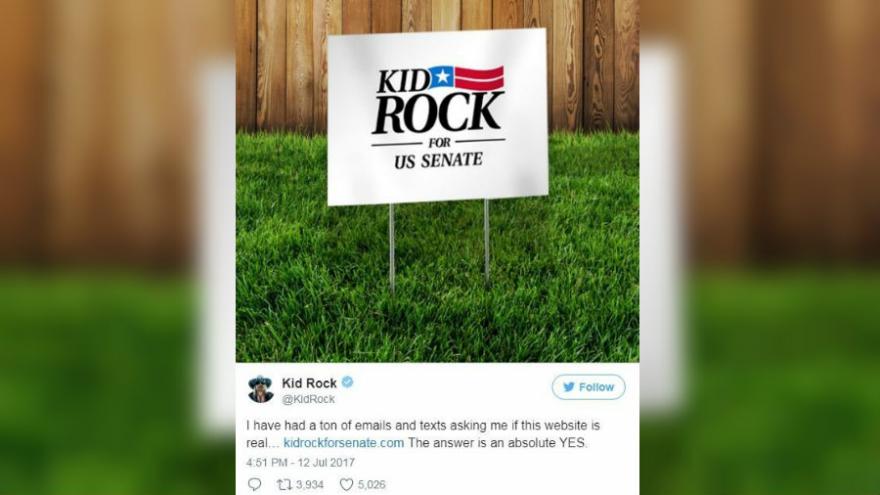 (CNN) -- Musician Kid Rock is insisting his tweet about running for the Senate is no joke, and at least two high-profile Senate Democrats are taking him at his word.

"I know a lot of people are thinking: this is some sort of joke, right?" Massachusetts Sen. Elizabeth Warren wrote in an email to supporters obtained by CNN and first reported by the Boston Herald.

"Well, maybe this is all a joke --- but we all thought Donald Trump was joking when he rode down the escalator at Trump Tower and announced his campaign, too," she said.

"And sure, maybe this is just a marketing gimmick for a new album or tour --- but we all thought Donald Trump was just promoting his reality TV show, too," she added.

"Kid Rock -- yes, Kid Rock -- tweeted that he's running for Senate in Michigan," the email reads. "He even launched a Senate website operated by a record label. So, I'll be honest, we don't know if this is real, a joke, or a bizarre publicity stunt. But I'll tell you this: I don't find it funny."

"In the Trump era, we can't afford to take this tweet as a joke," Schumer continued. "At a time when Senate Republicans are desperate to grow their ranks while pushing to rip health care from millions of Americans, we cannot afford to think of this as a publicity stunt."

Like Warren's email, Schumer's contains a link to a fundraising page where donations would be split between him and Stabenow.

Rock, whose legal name is Robert James Ritchie, teased his potential candidacy in a tweet Wednesday, saying "I have had a ton of emails and texts asking me if this website is real... http://kidrockforsenate.com The answer is an absolute YES."

But Sarah Anderson, deputy chief of staff for the Michigan Republican Party, told CNN in an email: "We have not had any conversations with Kid Rock so I cannot speak to the validity of this."

The 46-year-old Michigan native has rebuffed assertions that the announcement is a marketing ploy.

"Like politicians write books during their campaigns, I'm planning on putting out music during mine," he wrote in a Facebook post Thursday. "It's not a hoax, it's a strategy and marketing 101!"

In the post, Kid Rock also took at aim at Stabenow, a three-term Michigan senator, for tweeting: "I know we both share a love of music. I concede he's better at playing guitar and I'll keep doing what I do best: fighting for Michigan."

"Senator Stabenow and I do share a love of music, although probably not the same kind," Rock replied. "I concede she is better at playing politics than I am so I'll keep doing what I do best, which is being a voice for tax paying, hardworking AMERICANS and letting politicians like her know that We the People are sick and tired of their bullshit!"

Rock, a supporter of President Donald Trump, performed at the 2016 Republican National Convention in Cleveland. He visited the White House with former Alaska Gov. Sarah Palin and rocker Ted Nugent in April.