Senator Donnelly on the impact of Pope Francis' visit 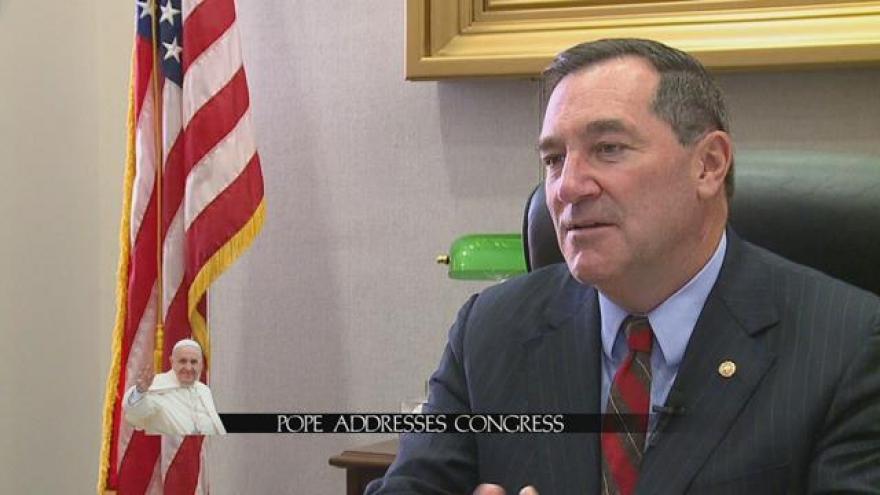 For the first time in history, a Pope addressed the U.S. Congress. Senator Joe Donnelly, D-IN, also a Catholic, spoke about the impact of Pope Francis' message and what it means for his constituents back home.

"It's been a whirlwind. It started yesterday with the White House greeting," said Senator Donnelly.

Senator Donnelly said he was honored to be a part of the Pope’s first visit on us soil.

After attending the white house greeting, he attended the canonization mass.

"Some of the members were in tears today and at mass yesterday," Senator Donnelly said.

It has been an emotional 24 hours for Donnelly. Sometimes, even a little humorous.

"We all had a big laugh when we saw he got in a Fiat. Had two black Suburbans in front and behind and a Fiat that’s the size of a Ford Focus. It's fitting with his style, which is modesty, being humble and not worried about material things," Senator Donnelly said.

Donnelly says it's those qualities that make Pope Francis an inspiration to Catholics all over the world.

Thursday's address to congress was no exception.

"When he made the cornerstone saying the Golden Rule-do unto others as you would do unto yourself. As simple as that is-it covers every situation," Senator Donnelly said.

Simple messages that struck a chord with the senator.

"I'm a grandson of immigrants. Of Irish immigrants who came to this country 100 years ago, so he said look in the face of others. It s the face of you at some other time," Senator Donnelly said.

Messages he says that has the ability to bring everyone together.

"That's what it's all about for me back home in Indiana and here in our country to try and take the messages of the Pope and incorporate that to make all of our lives a little better," Senator Donnelly said.

“As one of the most consequential spiritual leaders in the world, Pope Francis has dedicated his life to serving those in need. Like Billy Graham and other religious leaders, the Pope’s message transcends the borders of nations and the divide of political parties. My hope is that today Pope Francis can provide spiritual guidance and words of encouragement from Scripture that change lives and encourage souls at a time when our nation desperately needs it.”

“It is a great honor to have Pope Francis visiting the United States. He is a charismatic and inspirational leader, uniting people from different religions, countries and backgrounds. His vision for a world without poverty, war or environmental devastation is truly inspiring. His Holiness reminds us all how important it is to protect our earth and treat one another with respect, love and equality.”

“Pope Francis spoke with a moral and religious voice, calling our Congress and, through them, all of us to live up to the highest ideals of our nation, ideals embodied in the lives of Abraham Lincoln, Martin Luther King, Dorothy Day and Thomas Merton. At a time when our nation faces serious challenges and we are mired in polarization, I hope we hear and respond."

“The Pope’s message inspires me to help continue leading a thoughtful conversation on a few of the Judeo-Christian characteristics of our collective moral code.

“Serving others is a major aspect of our American Exceptionalism and is only possible because of the free market.  Economic freedom, invigorated by the spirit of competition and innovation are what increases our standard of living. These are gifts that we can continue to use to lift the impoverished and the least among us.  I appreciate the Pope’s acknowledgment of the nobility of business.  I believe we should continue to openly embrace free enterprise as the best engine ever devised to raise the condition of all men.”