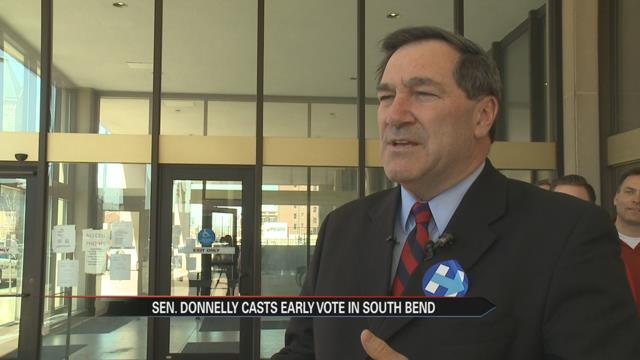 Today a leader in the Hoosier state was in South Bend getting his voting done early. With the primaries on May 3rd early voting has started and Senator Joe Donnelly took care of business on Friday.

“Yea I wanted to come here to have a chance to vote to make sure I voted in the primaries,” says Senator Donnelly.

Senator Donnelly says with the Indiana Primary quickly approaching on May 3rd he made it a point to cast his vote.

“We don’t know what the schedule is yet and I wanted to make sure I took care of my voting responsibility,” says Donnelly.

Early voting started April 5th. You can vote Monday through Friday and the two Saturdays before Election Day on May 3rd.

“She has extensive experience both over sees as secretary of state as a United States senator she has stood for working families time after time,” says Senator Donnelly.