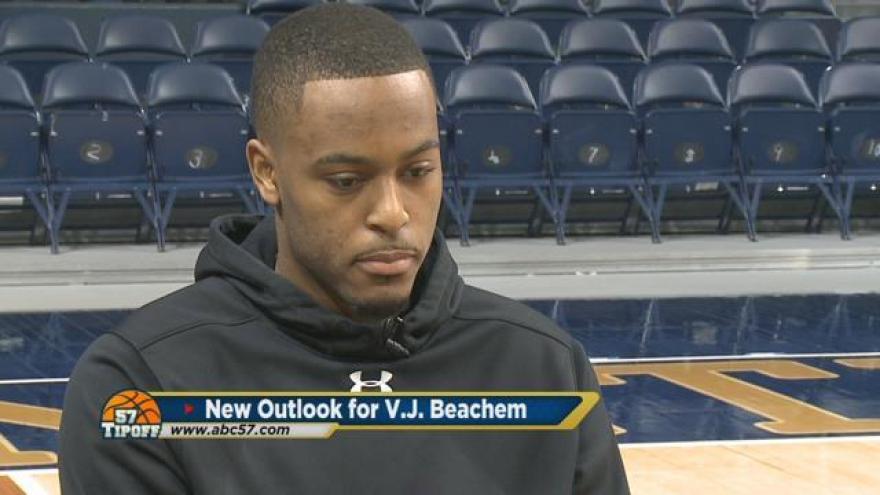 Notre Dame senior VJ Beachem entered his final season with a new outlook on life. Although he's playing with a heavy heart this year, he is grateful for every opportunity that he is able to step foot onto the court.

He pounds his chest 5 times before every game in honor of his friend.

"I told his mom, you know, that I'll be playing, not just this season but the rest of my life for him. With the number 5 on me," Beachem said.

Beachem grew up in Fort Wayne, a hot bed for basketball talent.

He played with and against guys like Purdue's Caleb Swanigan, Indiana's James Blackmon, Jr and Nigel Hayes at Wisconsin, but one teammate at new haven high school made the biggest impression.

"Man, he was a great player. Very active. Even for a guy 7 foot. He was really athletic, he could jump, run," Beachem said.

At nearly 7-feet- 300 pounds- Steve McElvene made an instant impact at New Haven.

"When Steve came, that's when we felt like we could be really good at, not only basketball, but we just felt like as friends. It would just be a great year for us," Beachem said.

"You didn't see just one of them, it was at least two or three of them together at all times. They were just like a family," said Jenell Shoals, McElvene's mom.

Beachem went on to Notre Dame and McElvene went on to play at the University of Dayton, but the two remained close.

"When I went off to Notre Dame and I would come back I would talk to him a lot. We would text back and forth," Beachem said.

The two played basketball together every chance they could.

Last May, McElvene and Beachem met up again for a pick-up game with friends.

"It just seemed like another summer night in Ft Wayne, getting together with the guys to play basketball. He looked great, he was moving up and down the floor great. Finishing alley oops, blocking shots, you know playing like the Steve we know and love, but the next morning I got the news," Beachem said.

On May 12th, 2016 McElvene was home playing video games when he collapsed.

"They said they worked on him for 37 minutes. That's the longest they ever worked on a person but there was nothing they could do," Shoals said.

McElvene had an enlarged heart.

"It's been really tough, not only on me but on my entire friend group. I think what we can learn from it is nothing is ever promised in life and you know we just want to live our lives with the same energy he did, you know always having a smile, always being a person that's looking to lift people up, is something I think we all can learn from Steve," Beachem.

"I think that's something Steve's mom really talked about after things happened, for all of us to keep playing and living our lives the way that he would want us to," Beachem said.

"He wouldn't want you to just shut down because he's not here. Whatever you do, trust me, he's watching you," Shoals said.

As long as Beachem is playing basketball, number 5 will always be right there with him.

"Any time before games, when I say my prayer, I say a few words to him because I feel like he's up there watching down over me," Beachem said.

But as good of a player as McElvene was, Beachem said he was an even better person.

Beachem says this has changed his perspective on everything and that he will always try to play and live the way McElvene did, with that smile on his face because tomorrow is never promised.