Sequester stalemate may lead to funding cuts for daycare, education 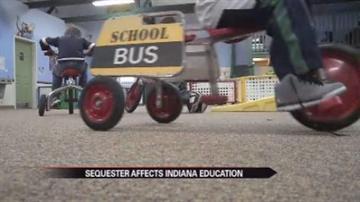 MICHIGAN CITY, Ind. -- Working parents rely heavily on daycare for their children.  If an agreement is not reached in Washington by midnight on Friday, March 1, day cares across the nation will lose government funding.

In Indiana, up to 600 children could lose the government funding that pays for them to go to daycare.

"It will be like life getting taken away from me in a split second." said Laura Rawson, a single mother of four.

Rawson says that for her, the federally funded voucher program is her only option for childcare.

"It actually costs more for child care than I get paid a month!"

If lawmakers in Washington do not reach an agreement by midnight Friday, daycares like Imagination Station in Michigan City will take a major hit.

The teachers that work at the daycare are also on the edge of their seats, because their positions may be on the chopping block as well.

"A lot of our kids are on the voucher program. If we lost them, we would have to make major cuts in our staff," explained Deborah Chubb, the Executive Director of Imagination Station.

It's not just day care, education as a whole in Indiana will be affected by this sequestrian.

It is a lot of numbers to crunch, and at the bottom of it all are real parents like Rawson, waiting and hoping that congress will do their job so that she can go back to doing hers come Monday.