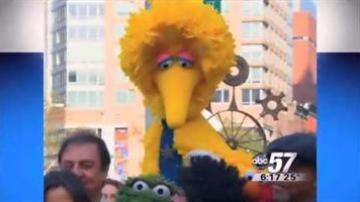 Big Bird and Elmo are headed to the Middle East!

An Afghan version of Sesame Street, partially funded by the U.S. government, began airing on Thursday.

An Afghan media company spent a year tailoring the popular children's program to the new audience.

Characters like Elmo and Ernie have new names, and all of the women wear veils.

This Sesame Street version is also partly filmed in Afghanistan.