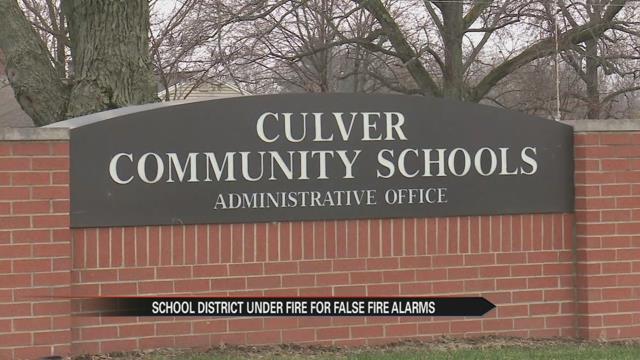 False fire alarm are costly. And it's something the Culver Community School Corporation is now dealing with.

A new school year, new technology.  In the fall, the Culver Community School System got a state-of-the-art alarm system, directly linking its three schools to the fire department.

Interim Superintendent Chuck Kitchell says, like with anything new, there were some kinks.

"We'll we've had seven false alarms since the system came into place." he says.

"Really three of them were because a basketball hit a pull station," Kitchell says. "which is really a freak accident in the gym class."

But others, were mechanical. And now, it may be time for them to pay up.

"At our last town council meeting, we approved sending an invoice to Culver Community Schools for seven false alarms that had taken place at the school corporation over the last month," says Town Manager, Jonathan Leist.

The Town of Culver had passed an ordinance addressing this issue, because last year, the majority of fire calls, were false alarms.  And something needed to be done.

"We didn't want them not responding because they're so used to it being false alarms," Leist explains. "We want to make sure that people are aware it costs money for us to send them out on these calls."

The school corporation is trying to appeal the fine at the town council meeting next week.

He adds, "I just don't think it's going to come to that."

And because of a good relationship between the town and the schools, they may just be in the clear.

"I think when he makes his case before council about what happened and what they're working on," Leist says. "I think they can come to a resolution that everybody can be happy with."

But, there's a silver lining to these false alarms.

"When you know when the fire alarm is going off, and 30 seconds later, I hear the town alarm going off, it's great to know the response is that quick," says Kitchell. "So the system is working. It's working exactly as we hoped it would.

This is the first time anyone has ever appealed a fine from this ordinance, and it will be up to the town council next week to see if the school system will really have to pay.