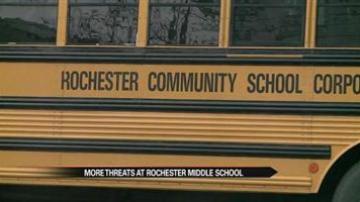 FULTON COUNTY, Ind. -- Another Rochester mother has come forward saying officials at Rochester Middle School did nothing about bullies who nearly drove her daughter to suicide.

The superintendent says they are taking the situation with the threatening notes seriously and have gotten local and state police involved to resolve the bullying problem.

"She wasn't bullied because she was too fat or too skinny or had acne or was ugly. It was simply because these girls decided they didn't like her," said the mother of the Rochester Middle School student.

The girl has been verbally harassed and has received anonymous text messages.

The girl's mother says the harassment escalated to the bullies telling her daughter she was worthless.

"Then she proceeded to tell me that she just wanted to kill herself," said the girl's mother. "We believe that if you take away your God-given life, you will go to Hell. I told her that and she said, 'I don't care. I'm living in Hell.'"

That's when she decided to admit the girl to the Michiana Behavioral Center in Plymouth, where the seventh grader spent four days and five nights on suicide watch.

"To make that decision to admit her, and leave my baby there under someone else's care while she's crying and scared and begging me not to leave her there, was a decision that I should have never have had to make," said the girl's mother.

She says the bullying has taken a toll on the entire family.

"Her older sister found her suicide letter, which was really hard to find, just telling us that she was sorry and she loved us," said the girl's mother. "I do feel like we're at the end of our rope. I definitely don't want to go through this again, I don't feel like any other family should have to go through this."