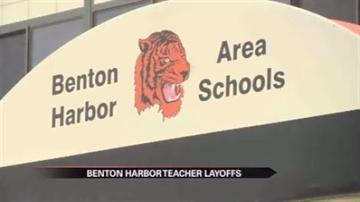 BENTON HARBOR, Mich. -- Benton Harbor teachers are packing up their classrooms, but budget cuts mean some of them won’t be coming back. Several teachers at Benton Harbor High School received word Friday that they would not be rehired.

The cuts come as part of a restructuring plan aimed to lay off or relocate 50-percent of the school's teachers.

The teachers were told they would need to re-interview to stay.

Teacher Steve Smith didn't even bother to open his letter Friday morning because he didn't reapply to stay at Benton Harbor High School.

"Because I'm applying for jobs around the Kalamazoo area, I didn't even reapply here, I had no interviews, but I open my letter and it says I was rehired as the hospitality instructor,” said Smith.

The teachers aren’t even given the option to teach elsewhere in the district.

Smith is one of only 30 teachers who could return next year.

"They have worked together for the district altogether approximately 70 years. One teacher’s had 30 years experience,” said Emily Hecht, president of the teacher’s union and special education teacher.

Teachers nearing retirement got fired, yet Smith was rehired without even interviewing to stay.

"I'm going to contact someone tomorrow I guess because I don't know how I could be rehired. I didn't even reapply,” said Smith.

Hecht didn’t reapply but was rehired, too.

"It's something that I really want to follow up with. There's some questions that we definitely have to ask the district,” said Hecht.

Some long-time teachers who wanted to keep their jobs, or at least have the option to retire, were upset.

But they understand that this is all about saving money:

Lay off teachers making the most and hire new ones for less.

That doesn't necessarily make it right- they said.