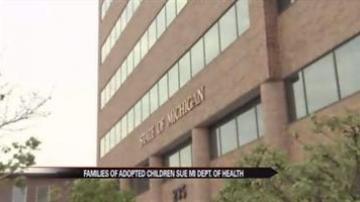 MICHIGAN -- Several families of adopted children have filed a lawsuit against the Michigan Department of Human Services and Governor Rick Snyder.

They claim the state did not disclose that the adopted children suffered from medical conditions like fetal alcohol syndrome and sexually transmitted diseases.

One mother says she was told her foster daughter had an infectious disease.

She says DHS did not tell her it was syphilis or check on her when the disease landed her in the hospital.

"It wasn't explained to me how she would breakout or anything like that," said Shannon Kantner. "Not one person from DHS came over to the hospital to see what was going on, they never called my house."

DHS issued a statement saying they remain committed to the 27,000 adopted children of Michigan and their families, including the eight families involved in the lawsuit.

But the families lawyers say, that is just not enough.