Several injured in accidents on US20 bypass 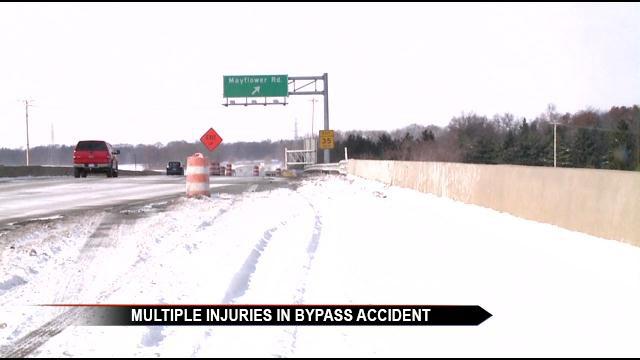 According to police, three people were injured in the initial accident and were taken to the hospital.

One of the victims was a driver who was out of his car and struck by another vehicle.

The victim, 61-year-old Joseph Quick of South Bend, was hospitalized with head, spine and leg injuries.

Police originally thought Quick was struck by a vehicle that fled the scene, but after examining the three vehicles involved in the accident, they determined one of those vehicles struck Quick.

While responding to the original 3 vehicle accident, a Southwest Territory Fire Engine was rear-ended by a semi carrying containers of pickles.

Three firefighters were taken to the hospital with non-life threatening injuries.

Drivers say the US20 bypass can be dangerous in severe weather.

"It's really, really scary. Like I said I take it every night and every morning coming home, going to and from work. So every day I just say a prayer that I don't get in any accidents because I've seen slide offs and cars stranded on the side of the road," said Melinda Trujillo.

Jeff Rupe says he tries to avoid the process in severe weather, but sometimes it is impossible.

"Sometimes it's the only way to get from point A to point B," said Rupe.