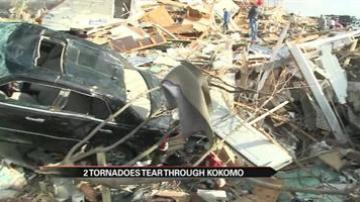 KOKOMO, Ind. -- The National Weather Service confirmed Monday that two EF-2 tornadoes hit the Kokomo on Sunday. Both tornadoes had winds up to 135 miles per hour. No one was killed, but several dozen people were injured.

Phyllis Rawlinas' home blew off its foundation and into the road.

"I couldn't believe it. This was the house that love built after 42 years of marriage this was our first home,"  said Rawlinas. "This was our dream house. Everybody loved this house."

"We got a call of hysteria, couldn't make sense of it," said Steve Branstutter.

Someone from Rawlinas' basement called him.

"Couldn't make much sense of it other than Michael's okay, Michaels okay," said Branstutter. "We jumped in the car not sure what we were going to find."

Branstutter rushed over to Rawlinas' home where members of his youth group were hanging out.

There wasn't much left of the house. There were several people trapped in the basement, including one underneath a car.

"This is another loss for me, but with the help of the lord I'm going to make it. I will make it because of my faith. I will make it," said Rawlinas.

Volunteers found some mementos in the rubble.

"They found this Christmas ornament that I had on the tree," said Rawlinas.

She said the only thing she wants to find is her husband's wedding ring.

Rawlinas is now staying with friends and church members.