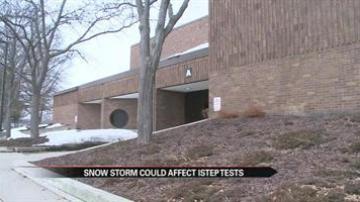 School officials say they hope they won't have to cancel school Wednesday.

Mother Nature has given local schools, parents and students a lot to complain about this winter.

They'll have more to complain about if severe weather interrupts ISTEP testing.

“While it wouldn’t be the best situation to be gone tomorrow and then to come back in and test the next day, I think that our teachers and our students are more equipped with some testing skills that hopefully that wouldn’t be too difficult to deal with," said Kay Antonelli, the Assistant Superintendent for Instruction at Penn Harris Madison schools.

Students will have until March 21st to finish this round of the ISTEP, but it would be best if there were no interruptions in testing.

“All of our schools, our children, our schools, our teachers are all assessed on this kind of testing and so we want to make sure that we’ve got the optimum potential going for everyone," said Antonelli.

Though parents aren’t too worried about an interruption in ISTEP testing, they say a snow day could interrupt preparation for next week’s IREAD. The third grade reading assessment test determines whether they can move on to fourth grade.

"Not necessarily about the test because if we have until the 21st to take it, then they should be able to make it up. But with IREAD being next week too, that’s a little stressful," said parent Cortnay Rowe.

“The best scenario is to always have our children in for successive days so that we’ve got better student contact time and we’re making sure that we’re building on those skills, but I do know that our teachers and our principals have worked diligently to make up for lost time," said Antonelli.

If school is canceled, Wednesday's portion of the test will have to be made up at a later date.