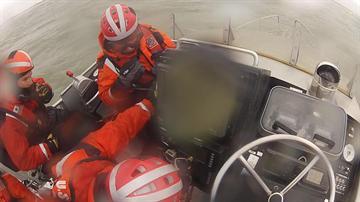 ST. JOSEPH, Mich. – Waves continued to pound the shore of Lake Michigan on Wednesday has what remains of Hurricane Sandy continues to pass over Michiana creating dangerously rough waters.

The wild conditions were perfect for The United States Coast Guard personnel in St. Joseph to do some training.

“To check the wave conditions, do a little training, we had some break-in crewmembers on board to show them how it is on the lake when we’re in big waves,” explained Boatswains Mate Third Class Aaron Quade.  “We want to know what kind of conditions we could possibly go out into if we have to go out and save some lives.”

The crew took one of ABC 57’s cameras along for the ride; the footage shows waves cresting up to 14-feet over the top windows of the boat.  The crew was tossed around and getting a taste of what Lake Michigan can do at its worst.

Taking a look at the footage of the crew fighting their way through waves is enough to discourage anyone from venturing too close to the lake during severe weather.

“You don’t want to be on the pier,” Quade explained.  “Waves crash on the pier, water rushes across and you can easily get swept off the pier.”

Quade was at the helm of the boat during the training exercise, not the easiest job with high waves breaking all around.

“I need to see where the waves are coming so I know how to maneuver the vessel in order to give my crew the safest ride and also so the boat doesn’t capsize or roll over anything,” he described.

In the weather Lake Michigan has been seeing since the remnants of Hurricane Sandy swept into Lake Michigan, the St. Joseph Coast Guard crews constantly have to evaluate the conditions to decide whether they can attempt rescues in their vessels.

“In weather like this we can always try to get a helicopter on scene,” Quade explained.  “Also Station Grand Haven has more qualified boat crews in order to handle this weather.”

The Coast Guard urges those living near Lake Michigan or any one traveling to see the big waves to use caution and not go too near the water until the severe weather dies down.