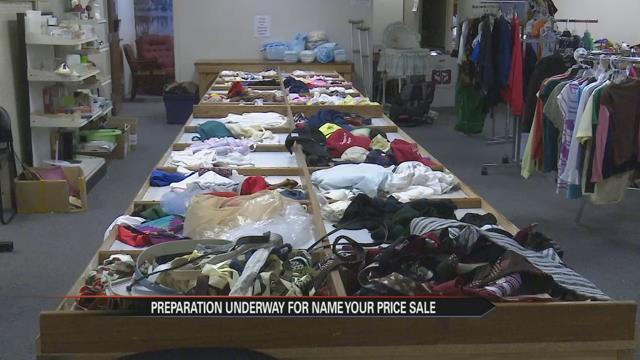 It's a sale like no other.  Shepherd's Cove, a nonprofit organization located in Elkhart, is planning a sale for Sunday afternoon. They're hoping that the fundraiser will not only fill the community's closets, but help keep the roof over their head, literally.

Over the past year, Shepherd's Cove has been plagued by a series of leaks, but Executive Director Sharlee Morain, says it's gotten worse.

"Last week, we had three leaks," she says. "This year, I can't count how many leaks we've had. It's serious."

The organization is known for helping hundreds of families throughout the Michiana area.  This month alone, they've helped over 400 families fill their closets and homes, free of charge.

But now, they're asking the community to help them keep their doors open.

The leaks have gotten so serious, it will cost $135,000 to repair.  If they wait, Morain says, they run the risk of serious mold and even a collapsed roof.

Sunday's sale is aimed to fix just that.  The shopping experience is aimed at bringing the community the pleasure of shopping, while giving back.  From 1-5 p,m., the public can come and shop at the Cove, paying only what they think each item is worth.

Morain says they plan on making this sale a bi-annual event, and hopefully will earn enough to repair the roof and keep the organization in operation.

If they don't, Morain says that will be a serious issue.

"There won't be any cove." She adds, "So we have to do something about this. We have to get this fixed. If we want to continue to be here, we have to."

But she's confident and faithful that the community will stand behind them.

"They care. Elkhart does have a heart," Morain says. "The Michiana area has a heart. They care about each other."

Over 120 shoppers came in and help to raise just over $2,300, which the organization says is a great first step towards their goal.