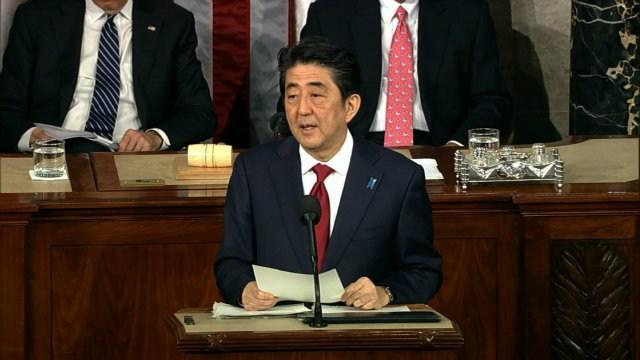 He will be the first Japanese leader to visit the site since the end of World War II.

Speaking to reporters on Monday evening, Abe implied the visit was in return for Obama visiting Hiroshima earlier this year.

"President Obama's message for the world without nuclear upon his visit to Hiroshima was engraved in the heart of the Japanese people," he said.

"I will visit Pearl Harbor with President Obama. This will be a visit to soothe the souls of the victims. We should never repeat the ravages of the war."

The surprise attack on December 7, 1941, killed more than 2,000 Americans and triggered the entry of the US into World War II.

The announcement coincides with the 75th anniversary of the battle on Wednesday.

A 'significant' gesture from Japan

"It's quite significant -- like so many things in any nation's past, a recognition of (its) occurrence is the first step in terms of creating something new to ensure it never happens again," he said.

Henry said the US-Japan relationship was the "lynchpin" of peace in the Asia region and Abe's move towards reconciliation was an acknowledgment of that.

"The security of both countries is very much tied together, because Asia is a very different place to 20 years ago," he said.

Although Abe will be the first Japanese leader to visit Pearl Harbor he won't be the first member of his family to do so -- his wife Akie Abe made a surprise visit in August 2016 to pay tribute.

In May, Obama became the first sitting US President to visit Hiroshima, where the US dropped a nuclear bomb in 1945 that killed more than 100,000 Japanese men, women and children.

Abe's planned visit is a way of reciprocating the commitment shown by Obama to Japan-US relations, said David Warren, an associate fellow of the Asia program at Chatham House in London.

Warren said that the visit would likely be welcomed by most Japanese but was still politically controversial.

"Prime Minister Abe has politicians within his own Liberal Democratic Party who will object to his paying atonement in this way because there are some political voices in Japan who reject the principle of what we see as guilt for causing the war," Warren told CNN.

Warren said that although the visit marked the attack's 75th anniversary, it was also timed ahead of President-elect Donald Trump's inauguration.

"I'm sure that Prime Minister Abe will want to send the most powerful message he can in advance of Donald Trump becoming president in January about the importance and strength of the US-Japanese alliance."

Obama put US-Japan relations high on his agenda when he assumed office in 2009. His administration has shown solidarity with Japan through joint military drills as the Asian nation faces nuclear threats from North Korea and a territorial dispute with China over the Senkaku Islands in the East China Sea.

On Obama's visit to Hiroshima in May, the president wrote in the museum's guest book, calling for a "world without nuclear weapons."

"Why do we come to this place, to Hiroshima? We come to ponder the terrible forces unleashed in the not so distant past," Obama said in a speech on the day.

"We come to mourn the dead ... their souls speak to us and ask us to look inward. To take stock of who we are and what we might become."