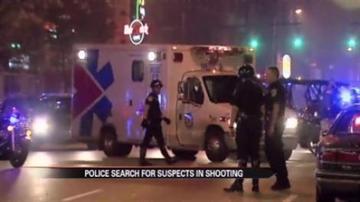 INDIANAPOLIS — Police are searching for suspects after a Thursday night shooting in Indianapolis left a teen dead.

It happened about an hour after a fireworks show ended.

Thousands of people were crowded into the downtown Indianapolis area.

Shortly before the shooting, police were breaking up a group of 40 to 50 teens. That's when a person told police one of the teens was shot a few feet away.

"I think we had over 50 or 60 thousand people last night, downtown, having a wonderful time with their families," said IMPD police chief Rick Hite. "We're not going to let one individual with personal vendettas...ruin it for all of those."

The victim who was shot died at the hospital.