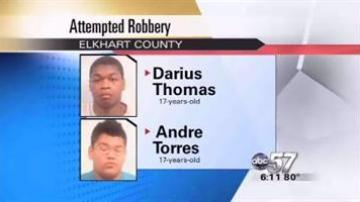 GOSHEN, Ind. -- A shooting investigation in Goshen lead police to a couple of armed robbery suspects.

Officers said 17-year-old Darius Thomas shot himself in the foot.

While looking into the shooting, police said they discovered that Thomas was involved in an armed robbery.

They said he held up the BP Gas Station.

He and Andre Torres were arrested for attempted robbery.

Police said they are being help at the Elkhart County Jail.