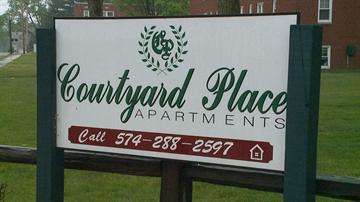 SOUTH BEND, Ind. – A 19-year-old man was shot in the leg in South Bend at around 2:30 a.m. at the Courtyard Place Apartments off of East Jefferson Boulevard, he’s expected to be fine but the location of the shooting is reigniting a debate about safety.

In February, angry residents of Courtyard Place went before the South Bend Common Council demanding something be done about safety and security at the complex.  Law enforcement officials also weighed in, the South Bend Police Department revealed that in the past three years they had been called to Courtyard Place over 1,300 times and 117 times in the first several weeks of 2012.

“Its non-residents coming onto the property and disturbing the peace,” described one resident who didn’t want his identity revealed.

At the community meetings earlier in 2012 the property owner and the city pledged to take action to improve security.  In the wake of Sunday’s shooting, ABC57 decided to follow-up to see if any action had been taken.

“It's been extremely quiet since those meetings, the traffic in here is almost null,” explained one resident.  “People that you see in here now are people that are actually coming in here for a reason."

Residents said they were hopeful that their decision to make a stand and demand change would produce lasting results.  In the past few months the complex has been described as peaceful, though some are still waiting to see if things have truly changed.

"That's when you'll really tell, in the summer time, when more people are out and about doing things," described a resident.

The man who was shot on Sunday did not live in the complex.

ABC57 was unable to get in contact with the South Bend Police Department to see if the number of calls to Courtyard Place had changed.