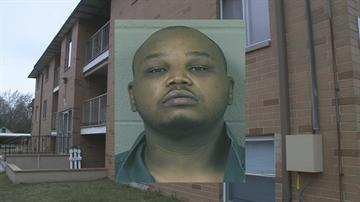 BENTON TOWNSHIP, Mich. - An apartment complex is on edge after a Stevensville man was shot three times Tuesday night. Benton Township Police said the shooter is still on the loose.

Glass is blown out from the front door of ‘Building S’ at the Village at Fairplain Apartments on E. Napier Avenue.

Just inside the door is where a 27-year-old Equanis Miller was fired at around 8:30 p.m. Tuesday night. Police said Miller got in an argument with an acquaintance and things escalated.

“There are always fights around here,” said Amy, a resident in the building. “Someone is bound to eventually bring out a gun.”

Amy told ABC 57 there is constant drug activity at the complex. “A lot of people are in to the drugs and that’s when the shootings come, with the money,” she said.

Amy said shootings are not common at the apartment complex. Tuesday’s shooting is upsetting. “I guess it does concern me staying out here for the kids and stuff but I still feel if you keep to yourself and you don’t get in those bad situations you’ll be safe.”

Police didn’t specify the reason for the argument between Smith and the shooter.

Jail records show Miller has been arrested 12 times since 2002 including arrests for drugs and domestic violence.

The suspect was last seen fleeing between buildings at the complex.

Benton Township Police weren’t immediately able to look up past records on police activity at the Village at Fairplain Apartments.