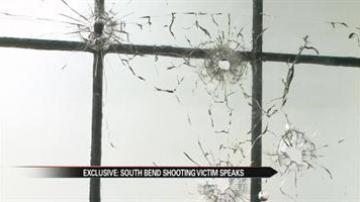 SOUTH BEND, Ind. -- The man who was shot on West LaSalle Avenue in South Bend Thursday evening spoke with ABC57 about the ordeal. The victim says he was in his house with his four grandchildren when someone started shooting at his home.

It started out as a movie night with his four grandchildren.

"I told my daughter I was going to get a movie to watch during supper, she said OK," said the victim.

It turned into a terrifying night.

"When it first happened I just hollered at my daughter and said, 'I'm hit.' Because it stung and burned and was real hot and I told her I said, 'Oh my god I'm hit, I'm hit.' That's all I could say," said the victim.

Someone fired what he believes was about 28 rounds into his house.

"I heard pop, pop, and the third pop," said the victim.

The victim was lucky.

You can see the bullet holes in his home.

"I'm just glad my grandbabies are OK, because that would have been two, little young lives for nothing," said the victim.

Since there haven't been any arrests, the victim is afraid the shooter might strike again.

"I'm afraid they are going to come back. Really I don't want to live here anymore I really don't because that's just getting too crazy when you want to shoot up somebody's house like that," the victim said.

If you have any information in this shooting, contact police.