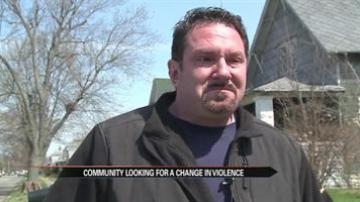 SOUTH BEND, Ind. -- A man who was shot last November is speaking out saying he is ready for the violence to end. The situation he was in was a minor disagreement that escalated to a shooting.

"The waist of his pant, he pulled it firm back here, pointed it towards my head and told me, 'I'll shoot you. I'll kill you right here,'" said William Trozzy.

In that moment, Trozzy says his life flashed before his eyes.

"I'm backing up, I'm freaking out. Right before I was getting ready to call my son out of the house, he shot me in the leg," said Trozzy.

It went in the front and out his side.

"I didn't feel it until I went to go walk and I almost fell on my face," said Trozzy.

Trozzy says what started as a small disagreement, ended with him on the ground, bleeding from a gunshot wound.

"My son said are you going to die daddy? He was there and it scares you when something like that happens," said Trozzy.

Trozzy says these days, too many fights are escalating to deadly shootings.

"If you do kill someone you don't just take their life you take your own life," said Trozzy.