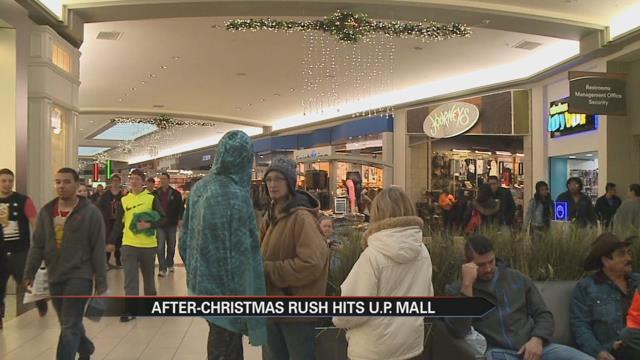 Christmas may be over, but holiday shopping was in full swing Saturday at University Park Mall.

“[I’m] doing some after-Christmas shopping,” Erica Murdoch said. “Got gift cards to spend. Getting some other family members presents.”

In between rides on the merry-go-round with her niece and nephew, Murdoch was taking advantage of a number of deals the day after Christmas.

She said she prefers to come right after Christmas, and she isn’t alone.

The Roberts family stood in line at Build-A-Bear to get Sarah Roberts her first Christmas bear, but Jeff Roberts summed up why they came to the mall right after Christmas in four words.

“Cause of the deals,” Roberts said.

Store after store was taking part in the post-Christmas festivities – many with sales as high as 75 percent off.

“I was returning gifts and exchanging them,” shopper Hailey Buchner said.

Braving the rain to shop the day after Christmas was entirely worth it, many shoppers said, even though Santa had gone back to the North Pole.

“The sales are good,” Murdoch said. “If you got gift cards, why not?”