Shoppers mixed on whether stores should open on Thanksgiving 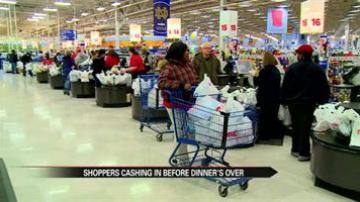 SOUTH BEND, Ind. -- Many retail stores are opening up Thanksgiving night giving shoppers a head start on Black Friday deals. But the backlash has prompted some to call it Black Thursday.

One last minute shopper at Meijer said his wife gave him an ultimatum.

"You can either stay home and get the rest of the stuff ready for dinner or you can go shopping," said Larry Dietz.

Dietz picked shopping: a chance to battle the lines at Meijer and try to salvage Thanksgiving dinner after his wife accidentally bought a Cajun spice turkey.

"Instead of a regular one so I came out and finished filling out all the stuff to go with a Cajun spiced turkey breast for late night snacks," said Dietz.

Meijer is just one store on a long list of places cashing in before your dinner table is cleared.

Shoppers like Dietz are thankful for some extended hours.

"It is wonderful. It really is. I know Meijer only closes a couple days a year and I'm just glad one of them isn't Thanksgiving," said Dietz.

But not everyone is thrilled about Black Thursday saying it is ruining traditions.

"It's kind of smart of them for the extra money, but I think it kind of interferes with the people for the Thanksgiving dinners you know and I like to eat," said Zac Johnson.

"I think they were thinking of their own convenience for having it early for themselves," said Austin Trusty.

For the sixth year in a row, Trusty plans to join the line outside this Best Buy in Mishawaka along with his friends who are skipping dinner for doorbusters.

"Usually the next day after Thanksgiving, that Friday when we all wake up and it's like another Thanksgiving dinner and we just eat leftovers and it's the same," said Joel Rangel.