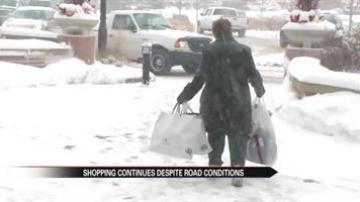 MISHAWAKA, Ind. – Heavy snowfall caused the roads to not be the safest for drivers on Saturday.  However, that did not stop people from holiday shopping.

“Some things you just have to do, so if you only have the weekend then whatever the weekend is doing that’s when you come do your shopping,” says De Bryant, from South Bend.

Customers toughed out the snowy conditions to get their shopping done.

“It was really messy and slushy,” says Bryant. “The cars were slipping and sliding.”

Although the roads were at the worst they have been all season, that did not stop shoppers at the University Park Mall.

“I am impressed by those people who came just because they were trying to get presents for loved ones,” says Bryant.

Erick Heckaman and his family drove an hour and a half from Nappanee because this is the only weekend they could do their shopping as a family.

“A holiday is a holiday, everyone wants to get their stuff before it is too late,” says Heckaman.

With only one more weekend left before the Christmas holiday, Suzanne Bynt from Granger took on the messy, wet sludge to shop for her seven grandchildren.

“I really needed to get it done so I could start wrapping,” says Bynt.