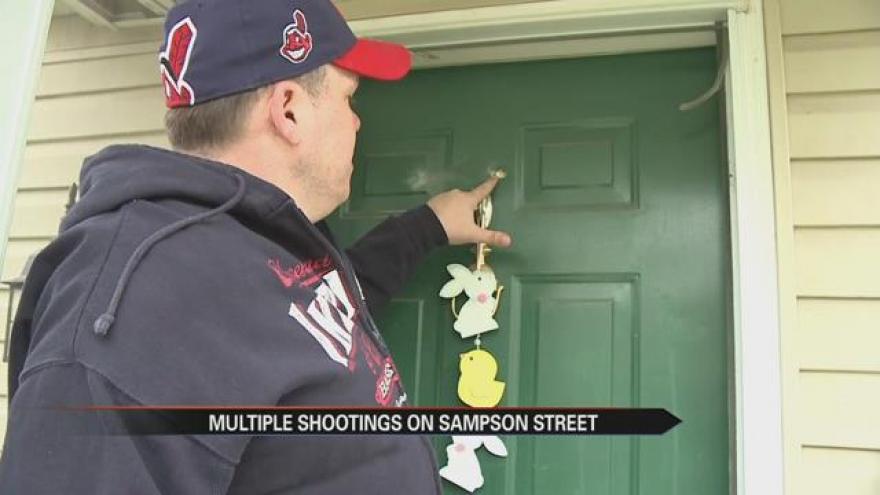 South Bend Police are investigating two shootings that took place just blocks apart, within one week of each other.

The first shooting happened in the 2600 block of Sampson Street during the early morning hours of Monday, April 18th.

The second shooting also happened on Sampson Street, this past Sunday evening.

South Bend Police said they are considering all possibilities including the chance these shootings could be connected.

“It just blows my mind the fact that somebody would shoot a gun and not even care where those bullets ended up,” said Thomas Hixon.

“The bullet pierced the door and it landed in the dining room right below my son’s room,” he explained.

His 2-year-old son and pregnant wife were inside when it happened.

Two bullets pierced the windshield on his mother’s car that was parked right in front.

Another two bullets went into a tree in Hixon’s yard.

One even pierced his front door.

“The minute my wife opened the door all the glass from the storm door fell in,” he described.

Neighbors who live on the typically quiet Sampson Street were spooked to hear more than 15 shots ring out.

And then learn of yet another shooting this past Sunday.

“Our thoughts immediately were, you know your heart starts pounding and you’re like holy crap am I safe?” said Jared Larue.

Thomas Hixon though thankful his family wasn’t harmed, is left with the financial burden, from the shooting he believes he wasn’t the intended target of.

Neighbors on the block have their suspicions.

They said there is one house in particular that sees a lot of traffic throughout the night and they worry drugs may be involved.