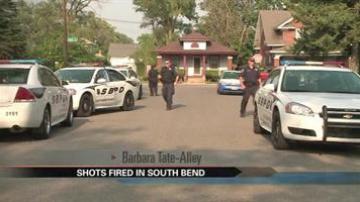 South Bend Police say one person was grazed by a bullet.

Barbara Tate-Alley said it’s a sound becoming all too familiar to people living in this South Bend neighborhood.

“When we arrived we found several shell casings. A vehicle was struck twice and a home was hit,” said South Bend Police Sergeant Samuel Diggins.

Witnesses told police several people were hanging out in an alley when they started shooting at someone across the street.

Shell casings were found near a child's bicycle.

Neighbors said the gun violence makes them afraid to do much of anything outside of their house.

“But now you’re sort of fearful to be able to sit out on the porch and enjoy porch time because you never know when you need to duck. It’s not a safe environment,” Tate- Alley said.

In a neighborhood full of young children, concern over the violence is growing.

“I don’t know why they’re shooting. If they’re getting frustrated and having a fight or whatever. But they are shooting and it is causing conflict,” said Tate-Alley.

Police say they don't know if this was gang violence but it is a strong possibility.