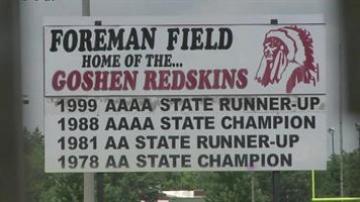 GOSHEN, Ind. -- The U.S. Patent and Trademark Office canceled the Washington Redskins trademark saying it was disrespectful to Native Americans. Two local high schools - Goshen and Knox - also are called the Redskins. Should they change their mascots?

The term 'Redskin' dates back to the early 1800s when European settlers used it to describe Native Americans.

Many people find it offensive because it objectifies a person based on the color of their skin.

We contacted the Pokagon Band of Potawatomi and asked them for comment and received the following statement.

Native American names and images in sports are a concern to many Pokagons, but issues like fighting diabetes, providing safe and affordable housing, and getting a good education are our most pressing topics. Our main focus is helping our people lead better lives.

The R-word crosses a line for us. In September 2013 our Tribal Council passed a resolution supporting the efforts of U.S. Senator Maria Cantwell and Representatives Tom Cole (Chickasaw) and Betty McCollum to change the name of the Washington NFL team.