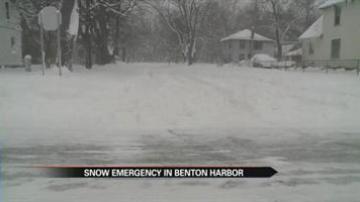 BENTON HARBOR, Mich. -- A snow emergency is still in place in Benton Harbor to keep people from parking on city streets so plows can get through. Many residents are just wondering when their streets will be plowed.

"It's terrible, I'm almost about to fall. The snow is so deep, it's knee deep right now," said Taunita Jefferson.

Jefferson finally made it out of her home on Benton Avenue.

She said her street hasn't been plowed since Sunday's storm and she's stuck at home with no food.

"So cold inside my house I have ice on the inside of my windows," said Jefferson.

City plow crews are working 12 hour days to get the roads cleared, but public works said the drifting snow has made the side roads impassable.

"No one can come pick you up or bring you anything because the roads are so bad," said Jefferson.

Watson said they have to keep the emergency routes clear so the side streets have been put on the backburner.

"We are having to go and do repeated work on the main drags, the emergency snow routes, the major arteries through the city and now we are working diligently to get the side streets open," said Watson.

Watson says they have three big plow trucks, three pickup trucks and a back hoe helping plow, but they can't keep up.

He said the cars parked on city streets are making the effort more difficult.