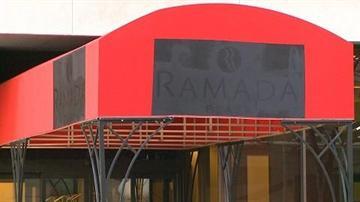 SOUTH BEND, Ind. – A moment of panic for some community members as they passed the Chase Tower building in downtown South Bend, Thursday; black paint obscured the Ramada Plaza signs on the awning in front of the hotel entrance on West Washington Street, leading some to think the building was being abandoned.

Community and business owner’s fears of a mass exodus of tenants from the building have been growing since the tower became vulnerable to a foreclosure.

As the end of the year approaches and leases start to come up for renewal, several tenants are uneasy about the future of the building.

But Thursday’s removal of the Ramada Plaza signage was part of an agreement that stems back to when the building went into receivership.

An agreement was reached where the Ramada Plaza would leave the building, but the name could continue to be used for 30 days.

Thursday, the new general manager of the hotel at the Chase Tower had the name removed so that the 30 day window wasn’t violated.

The group overseeing the property hired several key positions and turned the hotel portion of the building into an independent operation and joined the Magnuson Hotels Group.

The hotel is now called the Magnuson Grand Hotel.

David Waymire is the General Manager of the hotel. He says, replacing the hotels this way will help attract more buyers.

According to Waymire, some buyers may be put off by a piece of property if there is a well known franchise already under contract there.

He says, an independent hotel like the Magnuson Grand, will be much more flexible and easier to work with.

Eventually a buyer will be found and approved by the courts. When that happens, they will be able to decide if they want to keep the Magnuson Grand or switch to a different hotel group.

The building is need of repair and renovation of several things, including the elevator system.

Earlier this year, pieces of concrete broke away from the garage portion of the building and came crashing down. Luckily no one was hurt.

Tenants hope the South Bend Common Council are willing and able to help them attract a new buyer more quickly by offering an incentive to potential buyers.

They say, an incentive offer needs to be designed carefully so that the next owner can’t just pocket the money and move on quickly.

They also say, if the Common Council can’t give them some reassurances of the council’s willingness to spend money on the building, they will have no choice but to abandon the downtown landmark.

Such action could cause a devastating chain reaction of business failure in the heart of downtown.

The building manager for the tower says, if the building becomes vacant the police would have to station several officers inside the building 24 hours a day, seven days a week to prevent people from looting or getting to the roof.

His fear was if that were to happen, looters would throw stuff off the top of the building causing a dangerous situation for walkers and drivers 25 floors below.