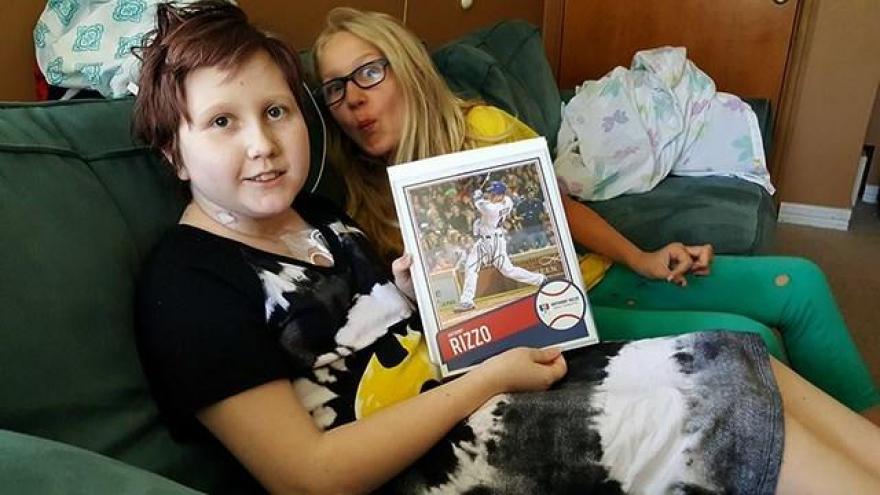 Abby Schrage’s source of inspiration is an autographed picture of Chicago Cubs’ player Anthony Rizzo and it has disappeared from her hospital room.

“I just think if somebody did steal it if they could return it? That picture meant the world to this little girl and I don’t know how valuable it is to somebody else,” said Abby’s mother Jill Schrage.

In 2016 Abby was diagnosed with two germinoma brain tumors and beat it.

She had a bone marrow transplant at the end of September and has been dealing with some major complications after and remains at Children’s Hospital.

Her mom thought bringing in her cherished Rizzo picture to her hospital room would encourage her. It was taped it to a window in her room.

“I just kind of hoped it would brighten her spirits, help cheer her up especially since Anthony Rizzo also had childhood cancer himself, that’s a great inspiration to show her when you are done with this battle nothing can stop you,” Schrage said.

Abby became a Cubs’ fan because that’s her mom’s team, while her dad is a St. Louis Cardinals’ fan.

In June of 2017 Abby got the autographed picture along with a personalized letter from Rizzo and now the family is desperate to get it back.

Schrage said on Friday, October 20th, she pulled back the window curtain to show her visiting family the picture and it was gone. Abby’s mom said they have searched the entire room, but it is nowhere to be found.

The hospital said it is investigating and checking their security cameras trying to figure out what happened, adding the well-being of their patient is extremely important.

The family is just asking for that picture to be returned no questions asked.