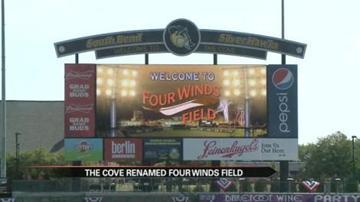 SOUTH BEND, Ind. -- The South Bend Silver Hawks announced whose name will be on Coveleski stadium. It will now be known as Four Winds Field.

Thursday, the Silver Hawks announced the organization had come to an agreement with the Pokagon Band of Potawatomi Indians for the naming rights of its field.

The stadium will be known as the Four Winds Field at Stanley Coveleski Stadium.

A bronze memorial bearing Stanley Coveleski's name and likeness will be installed permanently at the main entrance.

Andrew Berlin, owner of the Silver Hawks, said this partnership means taxpayers won't have to invest money in the stadium for capital improvements for at least a decade.

The agreement is for ten years with an option to renew for an additional five years.