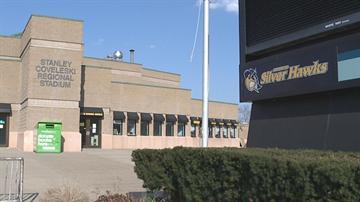 SOUTH BEND, Ind. – Fans of the South Bend Silver Hawks got the chance to sit down and meet with the team’s new owner Andrew Berlin on Wednesday night to preview renovations to the city owned Coveleski Stadium and make suggestions to improve the fan experience.

In July of 2011 officials with the City of South Bend made the controversial decision to put up $7-million dollars to renovate Coveleski Stadium.  Only a few months later came rumors that all that money, spent to keep the Silver Hawks in town, might have gone to waste as whispers flew around town that the team would be moving because of low attendance.

Fortunately that wasn’t the case; the Silver Hawks were sold to new owner Andrew Berlin.  Immediately Berlin announced he’d be making sweeping changes, and his own renovations, to the team and the stadium.

At Wednesday’s meeting Berlin said he’d already spent nearly $2.5-million dollars of his own money in work on the stadium.

“That’s the bet that I’m making that the kind of changes and renovations that I’m making will resonate with the fans,” Berlin explained.  “I plan to be here a long time.”

Among the crowd that filled the room for the community meeting were Bill and Sally Stockton.  They call themselves “fair-weather fans” because they usually only attend games in good weather.  They say they’re dedicated fans and after seeing the advertisements that the Silver Hawks have started running, they were intrigued by what would be changed and the stadium and the idea that Berlin would be taking suggestions.

“We do go to the games and we’ve seen the commercials and it all seems pretty enthusiastic,” said Bill Stockton.  “We just wanted to learn more about it and throw out a few suggestions or ideas if we could come up with anything.”

Unfortunately for the Stockton’s, Berlin said he had to turn down their idea of returning the old tradition of “$1 Mondays,” where everything at the stadium would cost only $1.  But, they were delighted to hear he was open to the idea of employing dedicated local fans to serve as “cheerleaders.”

“The ideas, it turns out, are some ideas we hadn’t thought of,” Berlin said.  “They’re going to be easy to implement and I think it will make a number of people happy.”

Though seeing the Silver Hawks do well financially is Berlin’s primary goal, he said another one is to see Coveleski Stadium become a benefit to all of downtown South Bend.

The folks at Wednesday’s meeting seemed to think the renovations already underway at the stadium would attract more fans.  Berlin described a new audio system, comfortable seating, improved access for wheelchairs, better food, a playground and a splash pad among numerous other additions being made to the stadium.  He also announced that, among other theme nights, will be “Flat Screen Fridays” where a television will be given away at every inning of
games on Friday.

“Hope it will bring a lot of good things and bring more people in,” hoped Bill Stockton.  “Should be an exciting season.”

Berlin said that 95% of the renovations being done should be completed by opening day on April 9.