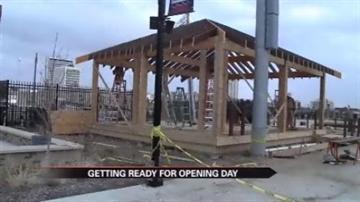 SOUTH BEND, Ind. -- The first day of spring means baseball season is right around the corner. ABC57 got a look inside renovations the Silver Hawks made at the Cove.

There are about 20 people at Coveleski Stadium working to get everything ready for opening day, Thursday April 4th.

The hut sits right next to the old synagogue the silver hawks morphed into a team store last season.

Now the nails and planks are going in for the bar that will seat 27.

The rest of the deck will adds 60 seats.

And that's not all the team is making room for.

"We've replaced and revamped some of our audio system here,” said Hart.

If you like to sit in the outfield and can't see the giant scoreboard, they've got a surprise for you.

A new video board is going up behind home plate.

Because of the cold weather, some tasks are on hold.

"We’re hoping to get the water turned on late this week or first part of next. Obviously we've got pressure washing that needs to be done,” said Hart.

Lucky for the silver hawks, the synthetic field means little maintenance after a snowy winter.

That's letting them open up the stadium early to some special guests.

“We've been in contact with folks from University of Notre Dame so they're going to be playing here Friday, Saturday, Sunday and Monday some of their games. Obviously that's one of the nice advantages of a synthetic field,” said Hart.

On opening night there will be fireworks and they’ll be giving away a flat screen TV.