Silver Hawks unveil design for new upgrades at the Cove 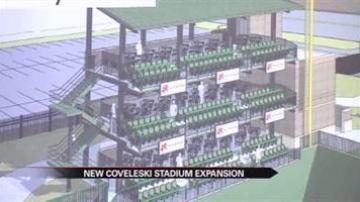 SOUTH BEND, Ind. -- It's not quite baseball season yet, but the South Bend Silver Hawks are still making headlines.

During Monday Common Council meeting, the team unveiled its design for new renovations at Coveleski Stadium.

Council members said they see this as another investment to revitalize the City of South Bend and they hope, just like the team, that this will attract even more people to the city.

The Silver Hawks owner, Andrew Berlin said the newly-renovated Coveleski Stadium knocked expectations out of the park this past season.

"Attendance was up 68 percent of the prior year, merchandise sales are up 55 percent," said Berlin. "We took an organization that was losing money and we are not only breaking even now, we are making money."

With so much success, Berlin said the team now has the opportunity to offer more at the Cove this next season.

"The fans came out and reward us with their business and now it is time to do more," said Berlin.

So, the team is seeking the city's approval for a multi-million dollar project, which includes a three story party tower.

"There will be a central kitchen at the back of the tower that will make all the food, there are elevators, two staircases, and a dumb waiter taking the food up to all the levels," said Berlin. "This will be amazing seating that will sit right on top of the right field wall."

Berlin said last year the team focused on making the park kid friendly, with a playground and splash park, but now it plans to offer something for adults.

"There will be a 100 seat tiki bar in left field, next to the synagogue and playground," said Berlin Monday.

Berlin said the goal is to offer something for everyone. He said this design is based on what fans want and the atmosphere created at the park with the latest round of upgrades.

"There is a certain type of dynamic in the Cove, where there are parties going on," said Berlin.

Although he say it;s worth it, it's going to cost more than $4 million. The Silver Hawks plan to pay for the project without the city's help, but they are still looking for independent sponsors to help fund it.

Council members saw the design for the first time at Monday's Common Council meeting. So, a vote is still needed before it's a done deal.

However, Berlin is confident the team will get approval for the project and say he plans to have the project completed in time for opening day this upcoming season.