Silverhawks fans to see improvements inside the Cove 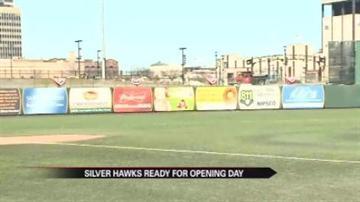 SOUTH BEND, Ind.-- The bases won't be loaded until Thursday night, but The Cove is loaded with new improvements.

"We added a brand new video board that will be behind home plate," said Joe Hart, President, South Bend Silver Hawks. "We've upgraded our P.A. system and sound system here at the ball park so there's a lot of new and smaller things that we've done here."

Watch the game from the new Tiki Hut and deck platform: a full service bar in left center field. It's just one of the ways to enjoy opening night.

Ticketholders 21 years old and over can drink up for Thirsty Thursdays. The petting zoo is for kids only. And don't forget there's a game going on.

"Our entertainment is to put good ball players out there, play good-solid fundamental baseball and Andrew Berlin and Joe Hart-- their job is to get people in to appreciate it and entertain them any other way we can get them in the ballpark," said Mark Haley, manager, South Bend Silver Hawks.

But he hopes the well-rounded team will speak for itself.

"We're pretty solid at every level with regards to running, throwing, hitting and all the rest of it," said Haley.  "But I'm excited about it and they're great guys.They get along, they've been friends for years, they've had success at the lower level so it's just gonna radiate to this level."

The players smell that success.

"We're gonna have some success so I mean, we're really just ready to get out here and play with some fans," said Cody Wheeler, starting left-handed pitcher.