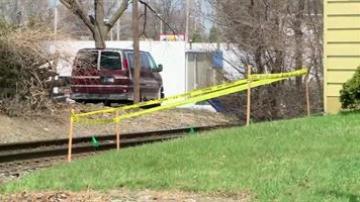 WARSAW, Ind. -- A six-foot wide sinkhole in Warsaw is growing and could be up to 18 feet deep. Because it is right next to a set of train tracks, residents are worried the weight of a passing train will make the sinkhole larger.

The city engineer says she doesn't think the sinkhole - or depression - poses no imminent danger.

"There are a lot of kids that walk through here, especially going to and from the CVS," said Thomas Elkins.

The neighborhood, near Hickory and Main, is a few blocks from downtown so there's a lot of foot traffic in the area.

City officials say the hole is six feet across and inside, a pipe that was laid 18-feet deep is exposed. They have blocked off the area around the hole.

But because it's just ten feet from the railroad tracks, residents worry it will just get worse.

"I hope they get it fixed and it doesn't cause the train to derail. The trains are my main concern because they are so heavy and they do come through here fairly regularly," said Elkins.

According to city workers, there will be a contractor checking out the hole as soon as Monday.

"I hope they get it fixed as soon as they can," said resident Karen Heeter.

City officials say they are still looking into what's causing this situation. They say it could have something to do with an abandoned pipe getting hooked back up to the water lines and they hope to have the problem fixed within the next month.