Sinkhole in Northwest Indiana growing by the day 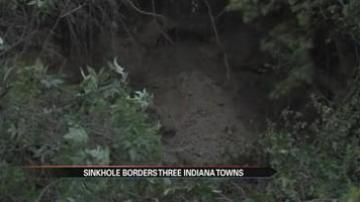 DYER, Ind. -- A sinkhole in Northwest Indiana continues to grow. The hole has grown to 40-feet wide by 30-feet deep.

The sinkhole is in a family's back yard.

They said this isn't the first sinkhole they've had since they moved into the home four years ago.

“I called the city, but they filled it with rock and covered it with grass,” says homeowner Letitia Casto.

“We’ve been complaining to different people at this all this time, everybody keeps ignoring. It could have been a little problem; it is turned into a monster at this point,” said Frank Casto.

The family doesn't know who is responsible for the sinkhole or who is going to fix it.

The family lives on the border of three Indiana towns.