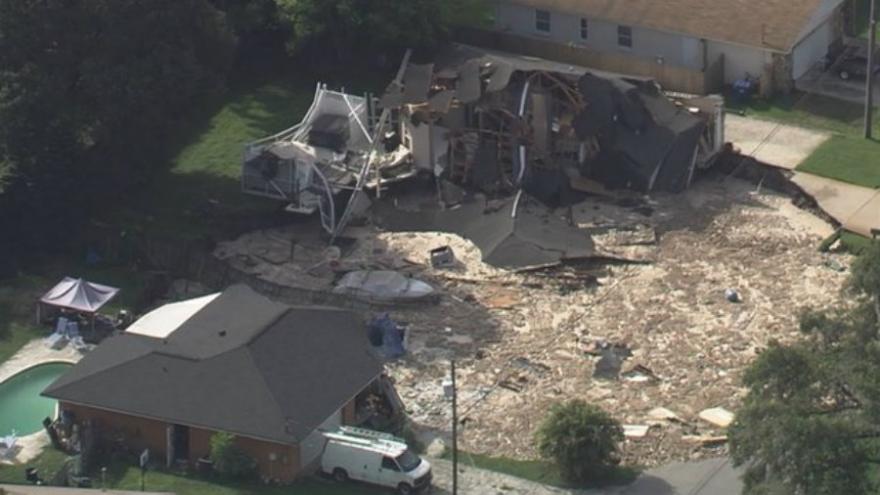 (CNN) -- A sinkhole in Florida that swallowed two houses appears to have stopped expanding, meaning a recovery-and-repair operation can begin, authorities said.

"The hole itself now appears to be dormant," Kevin Guthrie, Pasco County's assistant administrator for public safety, said about Friday's incident. It's the largest in the county in at least three decades.

Nine other houses were evacuated in Land O' Lakes, a residential area about 20 miles north of Tampa, Guthrie said. Power has been cut to about 100 houses in the neighborhood. No injuries were reported. Officials said it will take weeks, perhaps months, for life to fully return to normal for residents in the neighborhood.

The sinkhole, estimated to be 250 feet by 225 feet wide and 50 feet deep, is full of water and not draining because of debris, Guthrie said. It also looks like it's full of household chemicals and septic tank parts.

"We're treating this, in essence, as a hazmat incident," he said.

"It is probably a good thing that this sinkhole has actually been stopped up," he told reporters on Saturday. "There are a lot of contaminants in this water. It will allow us to decontaminate the area ... and clear the debris out."

Authorities were called Friday morning about a depression the size of a small pool that a boat on the property was falling into.

Pasco County Sheriff's Deputy Jason Murphy said he arrived at 7:48 a.m. ET to find that a sinkhole had reached the corner of one house. Nobody was home, he said, but fire and rescue personnel were able to get two dogs out before a corner of the house fell into the sinkhole.

By that point, the sinkhole was growing quickly, with "large chunks of the ground actually caving in," he said.

Murphy went to the second house and helped an elderly woman and two other females get out, he said. Other deputies yelled for them to move quickly because the ground was collapsing underneath a corner of the house, he said.

The residents of the first house drove up in time to see the rest of their house destroyed, Murphy said, speaking to reporters in front of the sinkholes.

"As soon as they got here, what you see now is what they witnessed as the house caved into the hole," the deputy said. "They were unable to get any belongings. Everything they owned was in there."

Murphy and a resident of the second house managed to get back inside to retrieve medications and documents before the final collapse, he said.

"You're looking at about half an hour in time from (being) only a couple of feet across to taking up their entire yard to taking in part of the house and reaching over into the next house," he said.

People who live in some other houses at risk have removed some possessions and pets.

Authorities have not said what caused this sinkhole. Pasco County records show the houses were built on the site of a sinkhole, Guthrie said.

Sinkholes often form when acidic rainwater dissolves limestone or similar rock beneath the soil, leaving a large void that collapses when it's no longer able to support the weight of what's above it, whether an open field, a road or a house.

Sinkholes are particularly common in Florida, which rests on a nearly unbroken bed of limestone, according to the Florida Sinkhole Research Institute. They often develop in Central Florida, including the Tampa area.

Deputies will be stationed in the neighborhood to protect residents and notify them of any problems, Sheriff Chris Nocco said Friday.

"For citizens, our hearts break for you," he said. "We know there's a high level of anxiety. ... I know it's going to be very hard for you to sleep tonight. Any bump in the night, you're going to wonder what's going on with your house."

The neighborhood uses septic tanks, not a sewer system -- a worry because the sinkhole could expand to connect to a nearby lake, Guthrie said.

"We will have three, if not four, septic tanks that will start merging with the lake," he said.

People were urged to stay away from the neighborhood. A fence will be built around the affected houses, and roads will be closed, Nocco said.