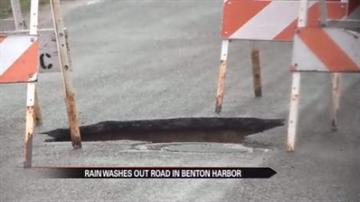 BENTON HARBOR, Mich. --  From roofs to roads, the heavy rains were just too much.  Roads workers say the sinkhole on Dixie Drive is nearly five feet deep and several feet wide.  They say it will slowly continue swallowing the ground and anything in its path.

Catrena Williams lives on Dixie Drive and she says people living in the area are very concerned.

"Its dangerous, kids are very curious you do not want them to make a mistake and fall into the hole."

Workers believe that a pipe burst underground but they cannot get to the root of the problem until the rain subsides.

At this point, water is seeping into some of the basements and homeowners say flooding is their biggest fear.

"We have had our basements flood before that can be real stressful, you don't want to get the mold; floods are just bad all the way around." said Williams .

In addition to the sinkhole, the roof caved in at a vacant building at 1800 West Main Street.  Police say it was most likely due to the heavy rains.