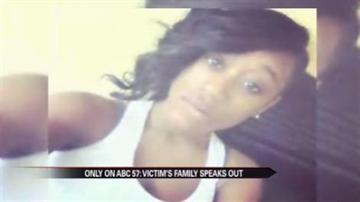 SOUTH BEND, Ind. --The search is on for a gunman who shot and killed a mother of two over the weekend.

20- year old Jarina Bailey fought for her life for 24 hours at the hospital, but died early Monday morning.

“I am going to miss her and I love her and I’m just,” said Jaesha Garrett-Clark.

Garrett-Clark, 18, could not hold back her tears as she talked about her 20-year-old sister Jarina Bailey.

Bailey was shot and killed over the weekend in one of three shootings that police believe are connected and gang related.

Her sisters are still in disbelief that Jarina is gone.

“It is unbelievable.  It is like it is not real.  I want to wake up and this all be a dream,” said Jaesha.

Bailey’s sisters and their grandmother agreed to go on camera not only to share their memories of this young mother of two, but to show the gunman how he destroyed a family with one simple shot.

“I don’t think they think how it affects the family. We lost our sister. She is not coming back,” said Jaeonna Garrett-Clark.

Now the family is desperate for help from those who know who pulled the trigger.

“I feel like they should have the three strike rule like they do in California. I think if they are tougher when they commit a crime, that might help,” said Christine Jacobs.

Until someone talks, this family will do what they can; pray to help Jarina’s two surviving children learn about the mom they lost too soon.

And pray that the person who took her life will someday face justice.

“Think.  It is not about how tough you are.  You are not proving anything by shooting somebody,” said Jaesha.

Police have not made any arrests in Jarina’s case, but Saint Joseph County Metro Homicide is still investigating.