Six people injured in 40-vehicle crash on I-94 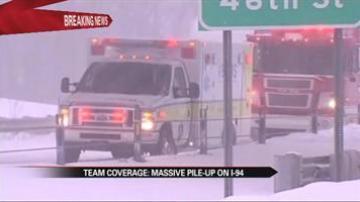 VAN BUREN COUNTY, Mich.-- Six people are in the hospital after a multi-vehicle pile-up on I-94 that happened around 5:15 p.m. Monday.

The six people hurt in the accident only suffered minor injuries.

According to Van Buren County Police, there were thirty to forty vehicles involved in the crash,

20 of which were semi-trucks.

Over a dozen tow trucks helped pull semis out of ditches.

Van Buren Police say the accident was caused by white out conditions which caused a chain reaction.