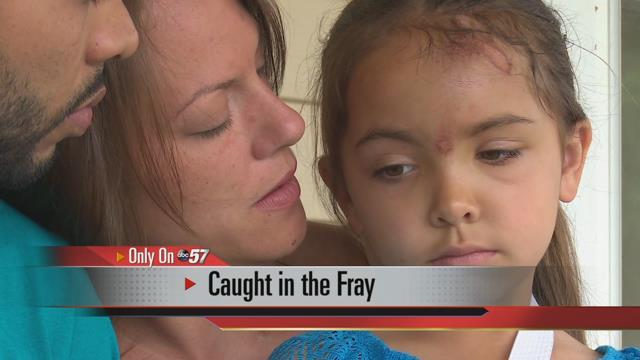 A family night out turned into a terrifying incident that landed a six-year-old little girl in the hospital.

“This could have gone worse they could have killed her or paralyzed her,” says Tosha Oswalt of South Bend.

Oswalt is talking about her little girl Amela.

Tuesday morning, the six-year-old sat on her mother’s lap with scratches on her face, a sling holding her dislocated arm and a blank stare in her eyes.

“The other guy swang at him and they started fighting and that’s when they trampled over her,” says Aloncio Arroyo, Amela father.

“It could have been anybody’s family in there but ya know it was mine and you know maybe God put it in my hands because he knows I’m going to do something about it,” says Oswalt.

Amela’s parents took many pictures documenting the scrapes and swelling she’s been experiencing and have filed a report with South Bend Police.

Oswalt says she also plans to press charges against the two men and adds the restaurant is not making that process easy.

“We asked to at least come in a view the video and they want us to subpoena them for it,” says Oswalt.

Oswalt says she is willing to hire legal representation.

In the meantime she has to work on holding back the tears so she can nurse her daughter back to being a light hearted six-year-old.

“I don’t know how I’m ever going to love her enough to show her that not everybody in this world is like that,” says Oswalt.

ABC57 contacted the manager and General Manager of Buffalo Wild Wings on Ireland Road and have not heard back.