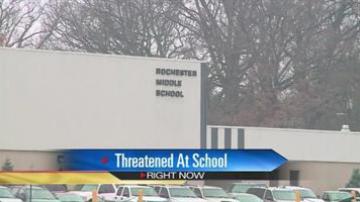 ROCHESTER, Ind. -- A Rochester mother is worried about her daughter's safety after the sixth grader found threatening notes in her locker. The mother says she has been in contact with school officials, Rochester Police and the Indiana State Police but still fears for her child's safety.

According to the girl's mother the first note implied that the bully had a gun-and the second said: The gun is ready.

"She has cried and cried about it and she's upset, she's emotionally upset about it," said the girl's mother who did not want to be identified.

With four children in the house, she says she's frightened.

She fears not only for the safety of her daughter, but for her other kids and for her daughter's classmates.

"There's all of the kids in the school and just because she's getting a threatening letter doesn't mean it's just towards her, it could be towards anybody in that school," said the mother.

The girl's mother says she grew up here and went to school here. She says bullying has become a terrible - and dangerous - problem.

"I never, I don't ever remember it being this way. If you got in a fight at school or if you said anything you got kicked out," said the girl's mother. "Now, they do in-school suspension for calling [names]. I mean she got called a lot of nasty names, all they got was five days in-school suspension. She's been threatened to be burned with a lighter and that kid is still in school."

With each school day that passes, she fears for her daughter's life.

"As a mother, I just fear for her. I cry every day, I'm scared to send her to school, just for her safety," said the girl's mother.

The Superintendent of Rochester Schools says Indiana law protects the identities of his students - so he cannot comment about the threatening notes.