Ski resort may be able to open this weekend 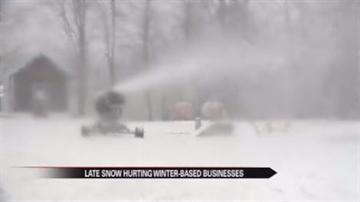 JONES, Mich. -- The snow guns are finally on and the snow is coating the hills at Swiss Valley Ski and Snowboarding Area. If temperatures stay low, the resort could finally open for the first time this season.

They should be gliding down the slopes, but a mild winter has made it impossible.

"Well, it's coming along pretty slow. We haven't had the temperatures through almost all of the Midwest,” said Jim Wiseman, General Manager, Swiss Valley Ski and Snowboarding Area.

Wiseman needs temps to drop and stay in the teens.

Wednesday’s cold window of opportunity means time to turn on the snow guns and pray it sticks.

"As we talk we're turning on the snow guns, one after another and we're probably pumping about almost 1800 gallons a minute,” said Wiseman.

His 100 snow guns will coat the slopes in hopes that this weekend they'll be coated with eager customers. Customers who have been calling daily to find out when they’ll be open.

"Well they're just been asking when we're going to open and our answer has been that we're not sure, but now that we're making snow we're pretty sure we'll be open by this weekend,” said Jamie Stafne of Swiss Valley Ski and Snowboarding Area.

The forecast calls for sub 30 degree weather for the next four days.

It won't be in the teens, but it just may be enough to open the gates.

"Check back, get your skis ready, their equipment ready, get their clothes ready to go, visit with their grandparents, get their shopping done because when we open we want them here,” said Stafne.