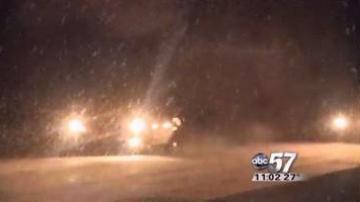 ST. JOSEPH COUNTY, IND -- There were at least ten crashes on the 20 bypass.  Most of them were fender benders and slide-offs.  The bypass was closed for nearly two hours.

The worst accident was a semi-truck that ran right into the back of a car that hit the median.  Three people were cut out of that vehicle and rushed to Memorial Hospital, two in serious condition.

The scene was chaotic.  Cars were everywhere, some people stuck inside.  MedPoint transported victims from Kohl's parking lot.

"I got off and I hit a bit of an icy patch that i didn't expect and then I just kissed the guard rail", said driver Nathaniel Krause.

Nathaniel Krause says he admits he was going to fast for the slippery roads on the bypass tonight.

"Everyone should be driving slower than I was", said Krause.

But he says he was just cruising along with his snow tires when the road suddenly became a sheet of ice.

"It's very slippery.  I drove thirty minutes before the accident in the same bit and I had no problem and then that extra degree of freezing popped on and it made all the difference", said Krause.

Krause says his car meant a lot to him and as he watched it get towed away, he said he will miss it.

"I have a tattoo of that car and it is a sad day for me", said Krause.

But he says the car doesn't mean as much as his life.

"I am okay.  My pride is a little hurt and my knee caps will probably be sore tomorrow", said Krause.

The bypass reopened just before nine.  Crews have been out salting and the roads are much better now.