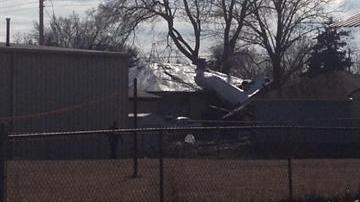 SOUTH BEND, Ind. -- Around 4:30 p.m. Sunday a plane crashed into three houses near the South Bend Regional Airport according to officers on the scene.

Two people were killed and three were injured.

The crash happened near the 1600 block of North Iowa Street in South Bend.

The pilot's body was found at the crash site.

According to South Bend Memorial Hospital, victims involved in the crash are there.

Fire officials said during the press conference a rescue effort is still in effect at the main house. It is dangerous because of the plane's fuel and the structure is not sound.

Officers have evacuated the area due to a gas leak. Those living in the area are being relocated to shelters at the Fireman's Hall and a nearby church.

Iowa Street has been evacuated from Keller to Elwood. It's likely those people will not be allowed back home until Monday.

The plane in the crash is reported to be a 6-7 passenger Learjet.

According to the online flight log the jet departed Richard Lloyd Jones, Jr. Airport in Tulsa at 1:58 p.m. CST. The flight was scheduled to land at South Bend Regional Airport at 4:23 p.m. EST.

ABC News reports that the FAA said there appears to be "an indication of a mechanical problem."

Officers said Homeland Security is on the scene.

According to our meteorologist, weather at the time of the crash appears to be a non-factor. The highest wind gust at that time was around 17 m.p.h.